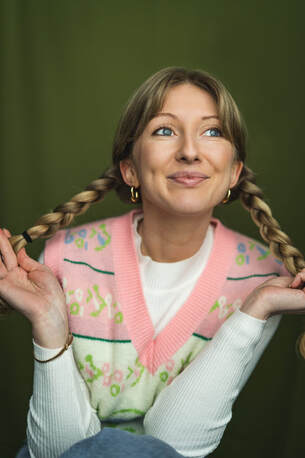 ​Hello! I'm a British-Jewish actress with an online comedy following.

As well as acting, I also spend my days writing scripts, recording voiceovers, creating comedy sketches and scrutinising over my web bio.

I started acting as a child, playing Little Cosette in the west-end's Les Miserables and series regular in BBC drama Grange Hill.

Since training at the Royal Central School of Speech and Drama I've been lucky enough to work across Film, TV, Theatre and Radio.

My comedy sketches have had 5M+ views, shared by the likes of Drake and Vybz Kartel, and I've been featured on Channel 4's The Big Narstie Show with Mo Gilligan. My comedy script The Schnoz won the acclaimed Pears Film Fund.
​
My voiceover work includes radio-plays, audiobooks and video-games. Recent credits include Doctor Who audio-drama alongside David Tennant, and radio-play Car Crash.
​
As well as acting, I've written and produced a number of short films that have been selected for various BAFTA-qualifying film festivals. I have several scripted projects in development.